Meditation
If we really take the incarnation seriously, if we believe that the incarnation changed the world forever and was not just a one-time event that happened some 2000 years ago, what does it mean for us to be pregnant with God, to carry Jesus and to deliver Him into a world that is often hostile and perhaps worse, dreadfully unconcerned with Christ?”

The Wedding at Cana
On the third day there was a wedding in Cana of Galilee and the mother of Jesus was there. Jesus and his disciples had also been invited to the wedding. When the wine gave out, the mother of Jesus said to him, “They have no more wine.”
And Jesus said to her “Woman, what concern is that to you and to me? My hour has not yet come.”
His mother said to the servants, “Do whatever he tells you.”

Jesus did this, the first of his signs, in Cana of Galilee and revealed his glory; and his disciples believed in him.

After this he went down to Capernaum with his mother and brothers and his disciples; and they remained there a few days. John 2:1-12.

He came to his home town and began to teach the people in their synagogue, so that they were astounded and said, ‘Where did this man get this wisdom and these deeds of power? Is not this the carpenter’s son? Is not his mother called Mary? And are not his brothers James and Joseph and Simon and Judas? And are not all his sisters with us? Matt. 13:54.

Then his mother and his brothers came to him, but they could not reach him because of the crowd. And he was told, ‘Your mother and

your brothers are standing outside, wanting to see you.’ But he said to them, ‘My mother and my brothers are those who hear the word of God and do it.’ Luke 8: 19-21.

The Crucifixion
Meanwhile, standing near the 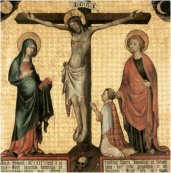 Mater Dolorosa
“There is no place where earth’s sorrows
Are felt more than up in heaven….”

Mary at Pentecost
He said to them: “It

is not for you to know the times or dates the Father has set by his own authority. But you will receive power when the Holy Spirit comes on you; and you will be my witnesses in Jerusalem, and in all Judea and Samaria, and to the ends of the earth.”
After he said this, he was taken up before their very eyes, and a cloud hid him from their sight.
Then the apostles returned to Jerusalem from the hill called the Mount of Olives, a Sabbath day’s walk from the city. When they arrived, they went upstairs to the room where they were staying….They all joined together constantly in prayer, along with the women and Mary the mother of Jesus, and with his brothers. Acts 1:12-14

Titles of Mary
Gate of heaven
Morning star
Health of the sick
Refuge of sinners
Comfort of the troubled
Mother of Sorrows
Help of Christians
Blessed Mother
Queen of the Heaven
Mary: History and Themes 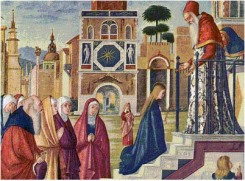 Protoevangelium of James c. 150
Gospel of James or The Infancy Gospel of James
Identifies Mary’s parents as Joachim and Anna
Early reference to the perpetual virginity of Mary
Identifies Joseph’s “other children”
The author claims to be James the Just (a step-brother of Jesus)

The Perpetual Virginity
The New Testament mentions Jesus’ adelphoi (ἀδελφοί), which can be translated as brothers, kinfolk, countrymen, or believers.
The Protoevangelium presents these adelphoias Joseph’s children from an earlier marriage.
The word adelphoiis the same word used by Paul in the letters to Timothy, Thessolonians, etc.

The Orthodox Church and Mary
Theotokos(Mother of God, God-bearer)
Venerate the Theotokos; do not worship her.
Eminent role in our salvation

Accept the perpetual virginity of the Theotokos.
Reject Roman view of the Immaculate Conception.
She was the first to learn of the resurrection (Gabriel visited her again).

The Orthodox Church and Mary

She was bodily assumed into heaven on her death (not dogmatic).
Celebrate the Feast of the Dormition.
Reject the notion of co-redemptrix.

Early Themes of Mary
Novum in Vetere latet, Vetus in Novo patet.
The New Testament is hidden in the Old and the Old becomes visible in the New.
Patristic tradition of foreshadowing of Mary (amplification).

“Therefore, just as sin came into the world through one man, and death came through sin, and so death spread to all because all have sinned. . . . If, because of the one man’s trespass, death exercised dominion through that one, much more surely will those who receive the abundance of grace and the free gift of righteousness exercise dominion in life through the one man, Jesus Christ. Rom. 5: 12-17

As Jesus became the new Adam, Mary became the new Eve.
Each dealt with an angel (Lucifer, Gabriel).
Through Eve came sin; through Mary came the savior.
Eve brought death into the world; Mary brought the conqueror of death.
Eve’s action cast us out of paradise; Mary’s opened the way to paradise.

Mary as the “New Eve”

Sets up the notion of Mary as the Woman of Valor described in Proverbs.

Genesis: “I shall put enmity between you and the woman, and between your seed and her seed; she will crush your head and you will bruise her heel.”

Mary as the “New Eve” 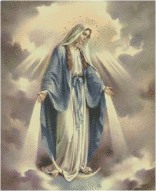 Mary becomes identified with the “woman clothed with the sun” described in Revelations.

She had crushed, and would continue to crush, the head of Satan.

Thus, in the Medieval Age, Bernard the Abbot of Clairvaux would write (c. 1131) of that passage in Genesis:

“For whom was this victory reserved except for Mary? Beyond doubt it was she who crushed the venomous head.”

First five centuries of the Church, the most important intellectual struggle was over the relationship between Christ’s divinity and humanity.

Mary: critical role in the answer.

Mary answers the Docetists (Gnostics) who believed that Christ’s human appearance was an illusion and he was fully divine.
Rejected by Ignatius of Antioch in 110 AD.

Mary answers the Mono-physites and Nestorions, who denied that Christ was fully human and fully divine.
Nestorians called Mary Christotokos.
Resolved at the Councils of Ephesus (431) and Chalcedon (451). 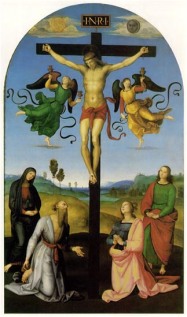 The witness of Mary provided evidence of Christ’s humanity, both at the birth of Jesus and at the crucifixion.

Mary in the Early Church 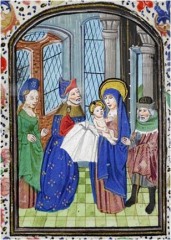 Mary represents paradox:
Virgin and Mother
Human mother of the One who is God
Theotokos

John of Damascus: The very name (Theotokos) signifies that Christ was both God and man.

The Heroine of the Qur’an
Mary is revered in the Qur’an (c. 632).
“Mary . . . who guarded her chastity, so that We breathed into her a life from Us, and she believed the words of her Lord and His Books, and was among the obedient.” Qur’an 66:12.
In the Islamic Nativity Gabriel announces:

“O Mary, God gives you news of a thing from Him, for rejoicing, [news of one] whose name will be Messiah, Jesus, son of Mary, illustrious in this world and the next, and among the honored, who will speak to the people when in the cradle and when in the prime of life, and will be among the upright and doers of good.” Qur’an 3:45-46.

The Heroine of the Qur’an
In the Qur’an, no less than in the Gospels, Mary is identified with a paradox (Virgin Mother).
“How can I have a son,” she said, when no man has touched me, nor am I sinful?” He said: “Thus will it be.” Your Lord said: ‘It is easy for Me,’ and that “We shall make him a sign for men and a blessing from Us.”

The Handmaiden of the Lord 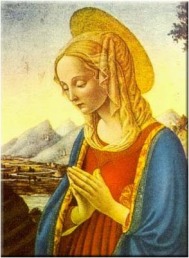 For early Christians, as for Jews and Muslims, theology centered around:
the relationship between free will and necessity; and
the relation between divine sovereignty and human freedom.

At the Annunciation, Mary refers to herself as “the handmaid of the Lord.”
She willingly becomes an instrument of the divine plan.
Model of patience, quietistic passivity, and unquestioning obedience.

Mary illustrates the teaching that: “With God shall nothing be impossible.”
She becomes the evidence that God’s sovereign and Almighty Will prevails, is conceived in wisdom and results in good, even though it might be veiled in obscurity for a while.Mary redefines obedience not as passivity, but as the supreme form of human activity.
Thus, the handmaid (female slave) of the Lord is much more complex than we might suspect.
Augustine will call himself “servus Christi servorumque Christi” (the slave of Christ and the slave of the slaves of Christ).

The Leader of Worship
Miriam “took a tambourine [timbrel] in her hand; and all the women went out after her with tambourines and with dancing. And Miriam sang to them: “Sing to the Lord, for he has triumphed gloriously; horse and rider he had thrown into the sea.” Exodus 15: 20.
Upon their salvation, their deliverance, Miriam leads the people of God in worship.

The Leader of Worship
Mary associated with Moses’ sister (Miriam), who led the people of God and the angels in praise of the Almighty (timbrels/ tympanistria).

During the 8th, 9thand 10thcenturies, the Iconoclasts condemned any image that represented Jesus or the Saints.
This had a special impact on Marianist devotion.
Constantinople considered Mary its patron saint, the mother and defender.
John of Damascus argued that the veneration paid to the image was not intended for the image itself; rather for the person depicted.

In 731, Gregory III held a synod of ninety-three bishops at St. Peter’s in which all persons who broke, defiled, or took images of Christ, of His Mother, the Apostles or other saints were declared excommunicate.

James R. Dennis, O.P. is a member of Saint Mark’s Episcopal Church in San Antonio and of the Anglican Order of Preachers. He frequently writes, preaches and teaches around the Diocese of West Texas on spiritual matters. He lives in San Antonio with his two silly dogs.