Grace and Hope in Christ (The Seattle Statement)

Commission met to carry out a dialogue “founded on the Gospels and on the ancient common traditions” thus attempting to “discover and develop our common inheritance of faith.” (Common Declaration of Paul VI and Michael Ramsey, 1966).

In 1964, Lumen Gentiumis published as part of Vatican II.

Calls Mary a sign of hope and comfort for God’s pilgrim people.

Characterizes Mary as the model for the whole Church, and “a model of the spiritual attitudes with which the Church celebrates and lives the divine mysteries.”

Paul VI recognized that Marian devotion must be integrated with the doctrines of God the Father, Christ and the Church.

Marian devotion must follow the Scriptures and the liturgy of the Church.

Marian devotion must be sensitive to the concerns of other Christians and affirm the full dignity of women in public and private life.

In 2002, John Paul II states that the rosary, “though clearly Marian in character, is at heart a Christocentric prayer.” Risarium Virginis Mariae.

An Agreed Statement on the place of Mary in the life and doctrine of the Church written in the hope that it expresses our common faith about the one who, of all believers, is closest to our Lord and Savior Jesus Christ.

Not binding; represents nothing other than the work of the theologians who wrote it and worked on it.

The Seattle Statement
“There can be but one mediator between God and man, Jesus Christ, and [we] reject any interpretation of the role of Mary which obscures this affirmation. We agree in recognizing that Christian understanding of Mary is inseparably linked with the doctrines of Christ and the Church.” 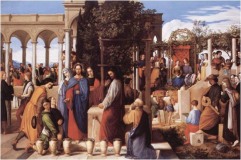 We have sought to understand Mary’s person and role in the history of salvation and the life of the Church in the light of a theology of divine grace and hope. Such a theology is deeply rooted in the enduring experience of Christian worship and devotion.

The Incarnation and all that it entailed, including the passion, death and resurrection of Christ and the birth of the Church, came about by way of Mary’s freely uttered fiat –”let it be done to me according to your word” (Luke 1:38).

We recognize in the event of the Incarnation God’s gracious ‘Yes’ to humanity as a whole.

Indeed, it is impossible to be faithful to Scripture and not to take Mary seriously.

Mary fulfills Isaiah’s vision of “God with us.”

As the Apostles’ Creed confesses: Jesus Christ was “conceived by the Holy Spirit and born of the Virgin Mary.” This Anglicans and Roman Catholics together affirm.

Mary as Theotokos
As the council of Chalcedon concluded: “One and the same Son … was begotten from the Father before the ages as to the divinity and in the latter days for us and our salvation was born as to the humanity from Mary the Virgin Theotókos.” In receiving the Council of Ephesus and the definition of Chalcedon, Anglicans and Roman Catholics together confess Mary as Theotókos.

Mary as the Greatest of Saints

Early Christian communities strongly felt that communion in Christ included a strong presence of the Saints as part of the Church’s spiritual experience.

The Lord’s mother occupied a special place in this “cloud of witnesses.”

Intercession and Mediation in the Communion of Saints

Scripture teaches that “there is one mediator between God and humankind, Christ Jesus, who gave himself as a ransom for all.”

The Statement rejects any interpretation of Mary that obscures this teaching.

Asking our brothers and sisters, those on earth and in heaven, to pray for us doesn’t challenge Jesus’ “unique mediatory work.”

Rather, in this way, we see the mediation of Christ displayed through the power of the Spirit.

Many Christians have found that prayer requests can properly and effectively be asked of those in the communion of saints who lived holy lives.

We affirm that asking the saints to pray for us is not unscriptural, though not a required element of life in Christ. 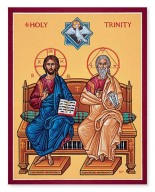 The method of this intercessory prayer must not obscure the believer’s direct access to our heavenly Father.

Any concept of invocation that blurs the Trinitarian economy of grace and hope must be rejected: not in harmony with Scripture or our ancient common traditions.

“We too need to look and listen for the moments of recognition and the leap of joy deep within. It may be when we encounter a person in whom we sense that the words we rather half-heartedly use about God are a living and actual reality. (That’s why the lives of the saints, ancient and modern, matter so much.)”

Rowan Williams, Archbishop of Canterbury, Sermon for the International Mass at Lourdes, Sept. 2008

Mary: The Pattern of Grace and Hope 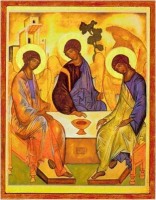 The Gospel hope lies in participation in the glory of God, through the mediation of the Son, in the power of the Spirit.

The testimony of the present glory of Christ provides the hope of the Church .

The destiny of the Church, its members, the saints chosen in Christ before the foundation of the world, lies in becoming “holy and blameless” and sharing in the glory of Christ. Ephesians 1:3-5; 5:27.

This is the communion of saints, and the proper function of the Church.

Mary speaks to us of our own vocations.

Mary was called by God to bear Christ into the world.

Bearing witness to the miraculous power of Christ to change the world, Mary instructed “Do whatever he tells you.”

Mary bore witness to the incarnation, the Cross, the resurrection and the power of the Church.

We can see Mary “as the faithful disciple fully present with God in Christ.”

She is thus a sign of the hope for all humanity.

The doctrines of the assumption/dormition speak to our hope that all the faithful will be drawn, through Christ, into God’s presence.

Mary foreshadows the pattern of hope and grace that will be fulfilled in Christ’s new creation when all the redeemed will fully share in the glory of the Lord.

Our present sense of communion with God is a sign, a foretaste, of divine grace and glory.

Mary provides an icon of the new creation in whom “the old has passed away and the new has come.”

A Spot of Ecumenical Friction

“We can agree” that the teachings of the Immaculate Conception and the Assumption, “understood within the biblical pattern of the economy of grace and hope … can be said to be consonant with the teachings of Scripture and the ancient common traditions.”

Anglicans have asked whether acceptance of the doctrines would be necessary to restoration of full communion.

Roman Catholics find it hard to envisage such a restoration in which acceptance of the Immaculate Conception and the Assumption are required of some but not others.

We agree that “one consequence of our separation has been a tendency for Anglicans and Roman Catholics alike to exaggerate the importance of the Marian dogmas in themselves at the expense of other truths more closely related to the foundation of the Christian faith.”

We agree that these doctrines must be understood in the light of the more central truth of her identity as Theotókos, which itself depends on faith in the Incarnation.

After Vatican II, the Roman Catholic Church is re-receiving the Christological and ecclesiological context for the Church’s doctrine concerning Mary.

We now suggest that the adoption of an eschatological perspective may deepen our shared understanding of Mary in the economy of grace, and the tradition of the Church concerning Mary which both our communions receive.”

“Such a re-reception would mean the Marian teaching and devotion within our respective communities, including differences of emphasis, would be seen to be authentic expressions of Christian belief.”
Mary in the Life of the Church

But in Mary, the profound mystery of “Christ in you, the hope of glory” (Colossians 1:27) finds a profound meaning.

She shares in the life of Christ: in His natural family, and in the eschatological family, on whom the Spirit is poured out.

Differences in the Traditions

Anglicans tend to begin from reflection on the scriptural example of Mary as an inspiration and model for discipleship.

Roman Catholics stress the ongoing ministry of Mary in the economy of grace and the communion of the saints.

The 20th century saw a great convergence: Anglicans were drawn into a more active devotion to Mary, and Roman Catholics looked afresh to the scriptural roots of this devotion.

Mary has a distinctive place in the history of salvation and in the communion of the saints.

She also has a distinctive place in liturgical and private prayer, and Christians rightly praise God for what he has done in and through her.

Any interpretation of Mary’s role must not obscure the unique mediation of Christ.

They recognize Mary as the Theotókos, the mother of God incarnate and accord her honor among the saints.

Mary can be seen as a prophetic figure of the Church.

Mary was prepared by grace to be the mother of our Redeemer, by whom she herself was redeemed and received into glory.

We recognize Mary as a model of holiness, faith and obedience for all Christians.

Any understanding of Mary must begin by listening to God’s word in Scripture.

In view of her vocation to be the mother of the Holy One, Christ’s redeeming work reaches ‘back’ in Mary to the depths of her being and to her earliest beginning.

When understood in the biblical pattern of the economy of hope and grace the teachings of the Assumption and the Immaculate Conception can be said to be consonant with the teachings of Scripture and our ancient common traditions.

“We agree together that in understanding Mary as the fullest example of the life of grace, we are called to reflect on the lessons of her life recorded in Scripture and to join with her as one indeed not dead, but truly alive in the life of Christ.”