Mary, The Mother of God week 1 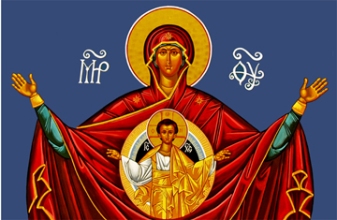 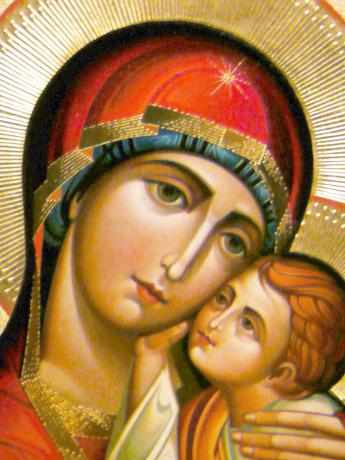 Meditation
If we really take the incarnation seriously, if we believe that the incarnation changed the world forever and was not just a one-time event that happened some 2000 years ago, what does it mean for us to be pregnant with God, to carry Jesus and to deliver Him into a world that is often hostile and perhaps worse, dreadfully unconcerned with Christ?” 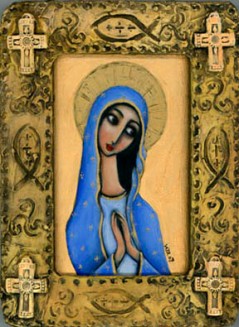 Oldest Scriptural Reference
When the fullness of time was come, God sent forth his son, made of a woman, made under the law, to redeem them that were under the law, that we might receive the adoption of sons. Gal. 4:4.

The Annunciation
In the sixth month the angel Gabriel was sent by God to a town in Galilee called Nazareth, to a virgin engaged to a man whose name was Joseph, of the house of David. The virgin’s name was Mary.… The angel said to her, ‘Do not be afraid, Mary, for you have found favor with God. And now, you will conceive in your womb and bear a son, and you will name him Jesus. Luke 1:26-31.

He will be great, and will be called the Son of the Most High, and the Lord God will give to him the throne of his ancestor David. He will reign over the house of Jacob for ever, and of his kingdom there will be no end.’ Mary said to the angel, ‘How can this be, since I am a virgin?’

The angel said to her, ‘The Holy Spirit will come upon you, and the power of the Most High will overshadow you; therefore the child to be born will be holy; he will be called Son of God. …. Then Mary said, ‘Here am I, the servant of the Lord; let it be with me according to your word.’ Then the angel departed from her. Luke 1:26-31 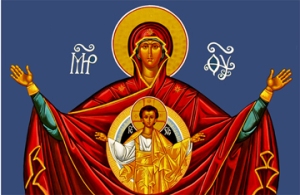 Now the birth of Jesus the Messiah took place in this way. When his mother Mary had been engaged to Joseph, but before they lived together, she was found to be with child from the Holy Spirit.
Matt. 1:18.
•All this took place to fulfill what had been spoken by the Lord through the prophet: ‘Look, the virgin shall conceive and bear a son, and they shall name him Emmanuel’, which means, ‘God is with us.’ Matt. 1: 22. 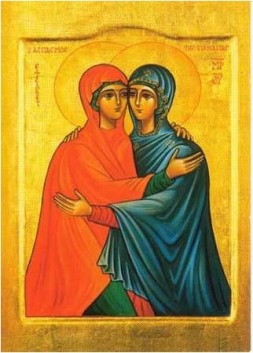 The Visitation
In those days Mary set out and went with haste to a Judean town in the hill country, where she entered the house of Zechariah and greeted Elizabeth. When Elizabeth heard Mary’s greeting, the child leapt in her womb.

And Elizabeth was filled with the Holy Spirit and exclaimed with a loud cry, ‘Blessed are you among women, and blessed is the fruit of your womb. And why has this happened to me, that the mother of my Lord comes to me? For as soon as I heard the sound of your greeting, the child in my womb leapt for joy. Luke 1: 39-43

Mother of my Lord (Adonai)
•Shema: Central affirmation of Israel’s faith and prayed by Christ (“Hear, O Israel: The Lord our God is one Lord.”)
•Council of Ephesus (431 A.D.): Theotokos

My soul magnifies the Lord,
and my spirit rejoices in God my Savior;
for he has looked with favor on the lowliness of his servant.
Surely from now on all generations will call me blessed:
the Mighty One has done great things for me,
and holy is his name.
His mercy is for those who fear him
from generation to generation.

He has shown strength with his arm; he has scattered the proud in the thoughts of their hearts. he has brought down the powerful from their thrones, and lifted up the lowly; he has filled the hungry with good things, and sent the rich away empty. He has helped his servant Israel, in remembrance of his mercy, according to the promise he made to our ancestors, to Abraham and to his descendants for ever.’

And Mary remained with her for about three months and then returned to her home. Luke 1: 51-56. 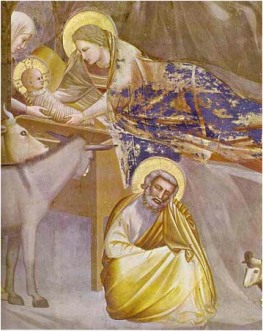 Joseph also went from the town of Nazareth in Galilee to Judea, to the city of David called Bethlehem, because he was descended from the house and family of David.

He went to be registered with Mary, to whom he was engaged and who was expecting a child. While they were there, the time came for her to deliver her child. And she gave birth to her firstborn son and wrapped him in bands of cloth, and laid him in a manger, because there was no place for them in the inn. Luke 2: 4-7.

When the angels had left them and gone into heaven, the shepherds said to one another, ‘Let us go now to Bethlehem and see this thing that has taken place, which the Lord has made known to us.’ So they went with haste and found Mary and Joseph, and the child lying in the manger. When they saw this, they made known what had been told them about this child; and all who heard it were amazed at what the shepherds told them. But Mary treasured all these words and pondered them in her heart. Luke 2:15-19.

The Flight Into Egypt

Now after they had left, an angel of the Lord appeared to Joseph in a dream and said, ‘Get up, take the child and his mother, and flee to Egypt, and remain there until I tell you; for Herod is about to search for the child, to destroy him.’

Then Joseph got up, took the child and his mother by night, and went to Egypt, and remained there until the death of Herod. This was to fulfill what had been spoken by the Lord through the prophet, ‘Out of Egypt I have called my son.’ (See Hos. 11:1.)

When Herod died, an angel of the Lord suddenly appeared in a dream to Joseph in Egypt and said, ‘Get up, take the child and his mother, and go to the land of Israel, for those who were seeking the child’s life are dead.’ Then Joseph got up, took the child and his mother, and went to the land of Israel. There he made his home in a town called Nazareth, so that what had been spoken through the prophets might be fulfilled, ‘He will be called a Nazorean. Matt. 2: 12-23 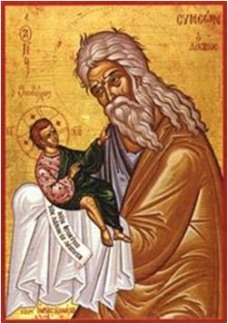 Guided by the Spirit, Simeon came into the temple; and when the parents brought in the child Jesus, to do for him what was customary under the law, Simeon took him in his arms and praised God, saying,

Master, now you are dismissing your servant in peace, according to your word; for my eyes have seen your salvation, which you have prepared in the presence of all peoples, a light for revelation to the Gentiles and for glory to your people Israel.’ 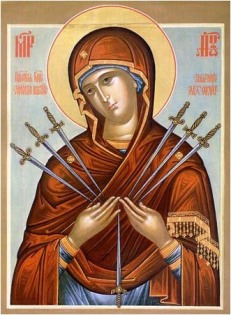 And the child’s father and mother were amazed at what was being said about him. Then Simeon blessed them and said to his mother Mary, ‘This child is destined for the falling and the rising of many in Israel, and to be a sign that will be opposed so that the inner thoughts of many will be revealed — and a sword will pierce your own soul too.’ Luke 2: 27-35.

When they did not find him, they returned to Jerusalem to search for him. After three days they found him in the temple, sitting among the teachers, listening to them and asking them questions. And all who heard him were amazed at his understanding and his answers. When his parents saw him they were astonished; and his mother said to him, ‘Child, why have you treated us like this? Look, your father and I have been searching for you in great anxiety.’

He said to them, ‘Why were you searching for me? Did you not know that I must be in my Father’s house?’ But they did not understand what he said to them. Then he went down with them and came to Nazareth, and was obedient to them. His mother treasured all these things in her heart. Luke 2: 45-51. 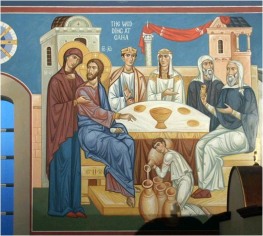 The Wedding at Cana

On the third day there was a wedding in Cana of Galilee and the mother of Jesus was there. Jesus and his disciples had also been invited to the wedding. When the wine gave out, the mother of Jesus said to him, “They have no more wine.”
And Jesus said to her “Woman, what concern is that to you and to me? My hour has not yet come.”
His mother said to the servants, “Do whatever he tells you.”

James R. Dennis, O.P. is a member of Saint Mark’s Episcopal Church in San Antonio and of the Anglican Order of Preachers. He frequently writes, preaches and teaches around the Diocese of West Texas on spiritual matters. He lives in San Antonio with his two silly dogs.